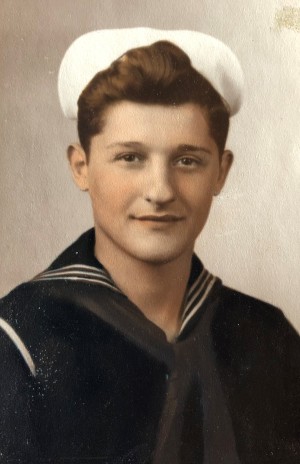 Kasper Joseph Kfoury was born and raised in Lawrence, MA to Lebanese immigrant parents, Joseph and Azizy Kfoury.  He was predeceased by his brother Louis J. Kfoury and leaves his sister, Rose Sabbagh and brother, George J. Kfoury and his wife Barbara.

A 1940 graduate of Lawrence High School, Kasper enlisted in the U.S. Coast Guard in 1942 and served his country during World War II as a Petty Officer - 2nd Class.  While stationed in Brooklyn, NY he became an instant leader among his fellow servicemen when visiting British allies on leave boasted that their country had it over ours because through their royalty they had a king and we didn’t.  After the cheers of the Brits settled, Kasper coolly retorted to the visitors, “Well, in this country an ace beats a king every time.”  After the thunderous cheers of the Americans, thereafter, while serving his country, he was fondly referred to as Ace.

While working in Rocky Mount, NC in 1952, he met his future bride and belle of his life, Joyce Tolston, and they were married in 1953.  After 68 years together he leaves Joyce and their children, June K. McNeil and husband Fr. Bryan, Robert T. Kfoury and wife Elisabeth (Hopping), Sandra K. Kalil and husband Eli, Steven P. Kfoury and wife Julie (O’Brien), and Eric J. Kfoury and wife Gladi (Rosica) all of greater Lawrence; and 14 grandchildren, Alana & Richard McNeil; Thomas, Claudia, & John Kfoury; Eli Jr. and Adam Kalil; Steven Jr. and wife Alexandra, Kaleigh, Daniel, & Robert Kfoury; and James, Michael, & Gianna Kfoury.  He is also survived by many loving nieces and nephews.

He had a successful 40-year career working as a chemist and Plant & Safety Coordinator at GenCorp Inc., f/k/a Bolta Rubber Company, a division of General Tire & Rubber Co., in Lawrence, MA.  Also an avid sports fan, he passed along his great enthusiasm and dedication particularly for the Boston Red Sox (“Ted Williams was the best!”) and Celtics to his children and grandchildren, and could regularly be seen happily cheering them on in any of their many sports endeavors, in everything from T-ball to college sports.  He also enthusiastically shared his love for Big Band music and Classic Movies, enriching his entire family’s appreciation and education.

A deeply religious man, Kasper served his lifelong parish, St. Joseph Melkite Church in Lawrence, in several capacities, receiving the eparchy’s highest honor, The Cross of Jerusalem, on May 10, 2009.

He was a loving and kind man who modeled and lived by the Golden Rule, devoted to his family, religion, and country.  May his memory be eternal.

To send flowers to the family or plant a tree in memory of Kasper J. Kfoury, please visit our floral store.